Android Auto is a great experience, but it’s not particularly easy to make a part of your life yet.There’s no denying how cool Android Auto is. As a concept, it’s everything we’ve wanted out of car stereos since everyone figured out Google Maps was infinitely better than whatever was living on your “infotainment” system. Toss in compatibility with a healthy number of music and podcast apps, a self-imposed limit on notifications while driving and the ability to have text messages read to you while you drive, not to mention plenty of voice controls, and you’ve got a decent first generation offering. The only problem with Android Auto for most folks is the price.

It doesn’t matter who you are, $700 as the “low end” for Android Auto devices that aren’t included in your vehicle is a tough pill to swallow, and that’s assuming you don’t also need to pay to have it installed.

If you’re looking to check out something that looks and feels an awful lot like Android Auto without spending the money, and you don’t mind beta-testing or offering feedback based on your use, there’s an app being developed right now to scratch that particular itch. It’s called AutoMate, and there’s already a lot to like in this app.

It may not be Android Auto exactly, but it’s easily close enough for folks unwilling to shell out for a new in-car system.

A fairly constant question asked in comments and throughout the forums here at AC is whether or not Android Auto is really more useful than a Bluetooth connection to your existing stereo. It’s a valid question, especially since all of the Android Auto apps live on your phone already and adding Bluetooth to your existing stereo is significantly less expensive than replacing the entire thing. For the most part, our answers take into careful consideration how useful the car-friendly UI in Android Auto is. Since AutoMate uses a lot of those same interfaces, and Aukey was kind enough to send over a Bluetooth 4.0 stereo adapter, a full car demo to see how functional this app really is. 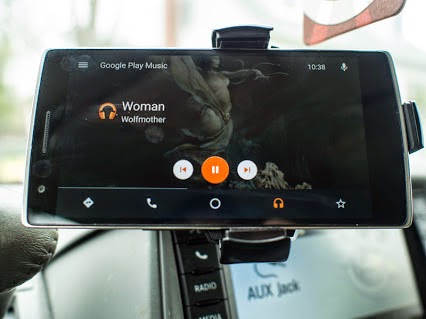 The AutoMate UI is basically Android Auto with some extra features bolted on. You can use this interface in landscape or portrait, which is great if you’re using this interface on a phone. If you’ve got a tablet with mobile data, however, landscape is where its at. The home panel offers a GPS-based speedometer and Yahoo Weather cards, and will float new cards based on whatever activity you are currently in on the other menu listings, like music and navigation. Since everything in this instance is playing through the Aukey adapter, all of the audio for turn by turn navigation and music plays right through the stereo.

Not everything is exactly Android Auto, however, and that’s to be expected. The dialer isn’t set up the same way currently, voice commands aren’t quite the same for calls and media playback, and every once in a while notifications from apps like Hangouts slip into the app through the immersive mode drop down, which isn’t great for a car experience. There’s a separate settings panel for app-specific brightness and audio controls, as well as the ability to turn off immersive mode and let your on-screen buttons stay on the interface, but for the most part the experience feels a lot like Android Auto. 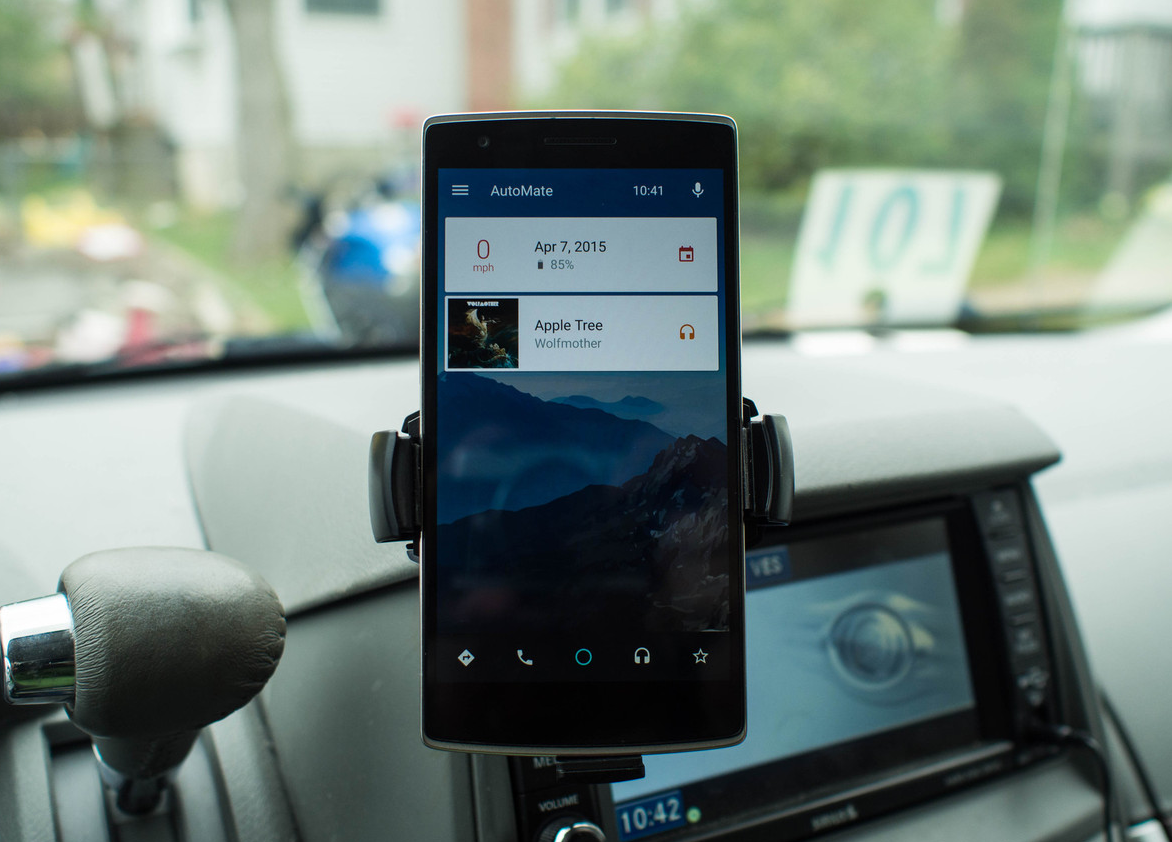 Being an unfinished beta, there’s some fairly serious bugs right now. The GPS tab takes forever to locate an address if it manages to successfully locate at all, the music tab has to leave the app in order to activate Play Music, leaving you to manually go back to the AutoMate app, and the cards in the home panel most of the time don’t do anything when you tap on them. It’s pretty far from complete, but it’s also quite impressive that the app has gotten this far in such a short time. It’s hard to recommend something so unfinished and crashy as an app to use in your car while driving, but it’s also not hard to see this app being an excellent tool for a lot of drivers before too long.