The complete guide on how to make your own app

While I applaud anyone who wants to know how to make your own app, it’s worth noting that Android developers have diligently made our lives a lot easier by creating all sorts of apps most of which are free to download from the android app store.

And hence we, mere mortals may never find the need to want to create an app on our own since virtually every need you might think of has an app that covers it.

But what if there’s just that one thing you need to have an app for that seemingly no one else has thought of yet? Better yet what if you have some great ideas for an app and would want to create one by yourself and make money off of it? You may just be looking to learn how to make your own app which is also a reason good enough.

How to make your own app

Welcome to Android Tipster’s Android course, I’m going to show you how to make your own app, even if you’re a complete newbie, plus I’ll introduce you to basic concepts of programming in Java, the language native android apps are written in. So get off Facebook and let’s get busy.

If you googled any queries about how to make an app and found yourself on this blog I’m thrilled to let you know you picked the right link to click on, cause I’m going to break it down like only a few android developers out there do and in no time you’ll be creating whatever that comes to mind after following this tutorial on how to make your own app.

For our example we’re going to create a simple app, let’s call it SmartOneliner, it lets you pick ‘cheesy’ or ‘dirty’, then displays a smart one-liner for you to use. Let’s get started.

You probably already know so much about Android but before I teach you how to make your own app, let’s revisit some of that information in order for us to keep this conversation within context. Android powers over a billion devices and people have downloaded like a Bajillion apps to run on those devices, which is where you come in. It’s built by Google and based on Linux. Plus it’s open source so anyone can download the source code, that’s why we have awesome mods like Cyanogen and Amazon can build their own app store and flavor of Android. Google develops Android in private then releases major versions under delicious Code Names like Jelly Bean, KitKat and the latest version 5.0 Lollipop.

To be a uber badass Android programmer you need to know Java, the language native android apps are written in. Java is an old school yet stable programming language that is used all over the place. Java is a statically typed object-oriented language. Big words huh? Stay with me! Statically typed means we always have to tell Java what’s in a variable or what your code is going to return, I’ll explain more in a bit. Object oriented means everything is an object. Object-oriented programming or OOP lets you separate your code into objects or chunks of code that do specific things. When you first start learning OOP it’s going to be hard. But remember, it’s like that hot brunette in college, you have to be persistent, really invest a lot of time and effort, but when she finally succumbs, it’s awesome. I highly recommend reading up on OOP before diving in, but I’ll do my best to introduce some concepts.

How to make your own app with Android Studio

The program we’ll use for this how to make your own app tutorial is Android Studio, it’s free to download from Google. Just Google Android studio, the first result will be the download site at developer.android.com, which also has tons of documentation. Android Studio is an IDE or integrated development environment built specifically for android. Basically a fancy badass text editor with a ton other features to make programming easier by helping you do stuff like debugging and code completion. It’s based on IntelliJ IDE made by JetBrains, a company that makes a bunch of IDE’s for a bunch of languages and other dev tools. 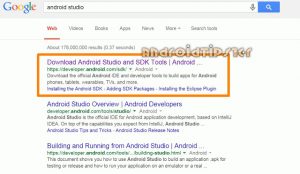 If you don’t have Android Studio running yet, pause reading and go set it up. If you’re on a mac just download and install, if you’re on Windows (like myself) you might need the Java JDK too.

Let’s open Android Studio and start a new project. I’ll be using the windows version of the program so don’t get spooked if yours looks slightly different. I’ll hold your hand while we go through these screens. The first thing that pops up is a welcome screen. I chose the dark Dracula theme for my program to distinguish it from other regular windows programs.

If you’re just starting, let’s do something first, go to configure then SDK manager and install everything checked there. Your app talks to the API, which Talks to the SDK which makes your app run. Next just click back and click start new project.

Now we name our application. We’re going to call this SmartOneLiner, then your Company Domain. This can be whatever you want, but we need it because it makes our app unique if you ever put it in the Google play store. That will create the package name you see highlighted with the orange rectangle in the image below, com.androidtipster.smartoneliner. That’s a naming convention for Java packages. And then at the bottom you see where the project is located on your computer.

Let’s click next. On this screen we choose what devices we want our app to run on. Nice try google, nobody wants to use Google Glass!

We’ll go with Android 4.4 Kitkat. If you click “help me choose” you’ll see a breakdown of API usage in all android devices, which is pretty cool. These jelly bean people need to get their upgrade on!

Ok click Next. On this screen we choose our ‘activity’. You’ll hear this term a lot as we progress. Activity is just how android refers to the different screens in your app, like the home screen or login screen. Let’s choose Blank Activity, but you should definitely come back to get busy with some of these other pre-built setups.

Click Next and we are prompted to customize our activity. We’ll leave it as MainActivity, we don’t have to worry about the menu resource name for this project. Then click Finish. It might take a while till Android Studio can set up everything so just be patient.

…and boom, your project is created!

If you haven’t worked with an IDE before it’s a little overwhelming, but take a deep breath and we’ll walk through the most important parts together in How To Create An Android App Tutorial – Lesson 2 of our how to make your own app series.

feel free to leave me any question in the comment section below and I’ll be glad to help you through it. Alternatively you can write me an email through the ‘Contact‘ page – turns out most of my readers prefer this method because it’s more personal and I happen to reply quicker.